Post traumatic stress disorder affects millions of people around the world in countless ways. Fortunately, there are a number of treatments for PTSD that can help. Acupuncture is a technique used to restore the natural flow of energy in the body by activating its own self-healing.


Post traumatic stress disorder (PTSD) is a mental health condition. It is an anxiety disorder that occurs after experiencing or witnessing a traumatic event, which may involve a real or perceived threat of injury or death. Roughly 24.4 million people are dealing with PTSD at any given time.

Individuals with PTSD have a heightened sense of danger. Their fight-or-flight response is damaged, which causes them to feel stressed or fearful.

Once referred to as "shell shock" or "battle fatigue," PTSD has received attention recently because of the number of war veterans with the disorder. However, PTSD can happen to anyone at any age. It occurs as a response to chemical changes in the brain after exposure to threatening events.


Click Here to Receive a $40 Certificate for your 1st Acupuncture Treatment and Evaluation.


What Are the Symptoms of PTSD?


Symptoms of PTSD can appear as early as three months after an incident or as late as years after. While the severity and duration of this illness vary, some people recover within 6 months while others suffer much longer. 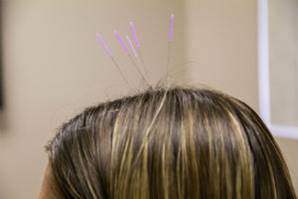 
How Is PTSD Diagnosed?


Generally, PTSD is not diagnosed until at least one month has passed since the time a traumatic event has occurred. If symptoms of PTSD are present, your physician will begin an evaluation by performing a complete physical exam and medical history. Although there are no lab tests that specifically diagnose PTSD, the physician may use several tests to rule out physical illness as the cause of the symptoms.

If no physical illness is found, you may be referred to a psychologist, psychiatrist, or other mental health expert who is specifically trained to diagnose and treat mental illnesses. Psychiatrists and psychologists use specially designed assessment tools to evaluate the presence of PTSD or other psychiatric conditions.

A physician bases their diagnosis of PTSD on reported symptoms, which include any problems with functioning caused by the symptoms. He or she then determines if the symptoms and degree of dysfunction indicate PTSD.

PTSD is diagnosed if the person has symptoms of PTSD that last for more than one month.


Physicians use a variety of medications to treat PTSD. These may include:

Your physician may also suggest psychotherapy for PSTD, which involves learning skills to manage symptoms and develop ways of coping. Therapy helps you to work through the fears associated with the traumatic event. 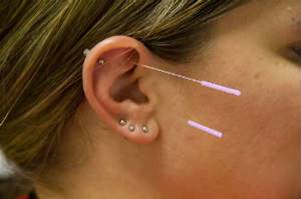 For those looking for a natural approach, acupuncture is also effective in treating PTSD symptoms. Utilizing points around the scalp, a recent study has shown after 4 to 6 sessions, those with PTSD had less difficulty sleeping, less anxiety, and less irritability.

A holistic health technique, acupuncture is a part of Traditional Chinese Medicine (TCM), which can be traced back at least 2,500 years. According to TCM, there is a natural energy flow (Qi) through the body that is essential for health. Disruptions of this energy flow are believed to be responsible for disease. Acupuncture is a technique used to restore the natural flow of energy in the body by activating its own self-healing.

Typically, acupuncture for PTSD is administered by stimulating specific auricular points in the body, which are responsible for controlling particular brain areas that help control nervous functions as well as mitigate stress levels.


Combining Acupuncture with Other Treatments 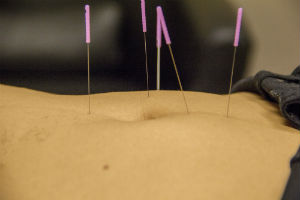 You may also consider combining acupuncture with Massage Therapy in order to reduce stress, decrease anxiety, and improve personal mood.

A 2012 study focusing on how integrative therapies can help promote reintegration among veterans found that those participants who received massage therapy reported significant reductions in tension, physical pain, irritability, anxiety, worry, and depression.

Massage therapy may also be effective for those experiencing dissociation as a symptom of PTSD. This allows those individuals to experience a more coherent sense of self, which is the primary reason most individuals seek out massage therapy.


Conventional intervention with pharmacotherapies has limitations and various side effects and often are only indicated if other measures have not been found to be effective or a person is not interested in trying them. CAM for anxiety disorders is a safe and effective treatment modality.

Acupuncture has been proven to be a beneficial treatment for PTSD. When we insert needles anywhere in the body, we produce a response. Many patients feel decreased anxiety and stress with acupuncture and feel improvement with their post traumatic stress symptoms. Other treatments provided by our office include Graston, Massage Therapy, Chiropractic and Physical Therapy.


Click Here to Receive a $40 Certificate for your 1st Acupuncture Treatment and Evaluation.