Hockey, once a sport confined to the northern United States, Canada, and other cold parts of the world, is growing in popularity. More and more kids are playing hockey, even in the hot states of Georgia and North Carolina. Last year, over half a million kids and young adults played on an organized team somewhere, whether in a recreation league or at their school; this represents a nearly threefold increase from just two decades ago. If you live in a major metropolitan area, you can be pretty sure there is some sort of USA Hockey league for your kids (or you) to participate in. However, while Americans are playing hockey at rates never seen before, there is one drawback to having so many of us suited up on the ice: injuries.

If you even mention the sport of hockey, most people think of injuries. In fact, many studies have indicated that there is a very high risk of injury when participating in the sport; recent Canadian research found that over 30 percent of youth players in a given season suffered one sort of injury or another. While breaks, fractures and concussions are prevalent in the game (ice is hard), soft tissue, shin splints issues are extremely common in hockey as well. Sprains, tendonitis, and other overuse injuries frequently occur, particular amongst players in organized leagues who practice and play very hard. Fortunately, sore knees or elbows don't have to keep you out of the game for too long. There are new and innovative techniques to treat soft tissue hockey injuries and get you back on the ice sooner rather than later. 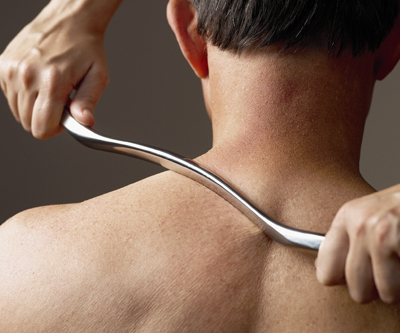 The Graston Technique for Hockey Players


One of the newer treatments to help hockey players recover from a painful soft tissue injury is the Graston Technique (GT). GT is a form of soft tissue mobilization, and involves a trained practitioner using a specially designed set of stainless steel instruments to manipulate afflicted soft tissue. The GT instruments allow clinicians to identify injured tissue, and then are used to break down scar tissue and other restrictors. The technique facilitates increased blood flow to problem areas, alleviates pain, and can speed up the recovery process. While still a relatively new medical innovation, a clinical trial have affirmed the Graston Technique's effectiveness at addressing soft tissue injuries along with other several clinical trials.

GT therapy is great news for hockey players suffering from sore knees and elbows from hard falls on the ice. Typical soft tissue injuries like this, often called adhesions, can keep muscles painfully tight and limit range of motion. GT is particularly effective at addressing these conditions. Additionally, GT can immediately address the buildup of scar tissue, alleviate lingering pain, and promote soft tissue healing for other hockey injuries as well. The Graston technique can be especially effective at addressing injuries before they become serious and debilitating, so it is worth checking with your physical therapist to get treatment as soon as your aches and pains start adding up.


Active Release Therapy, or ART, is another relatively new non-invasive technique to treat injuries commonly seen in hockey. ART is a patented technique that involves hand manipulation of soft tissue by a trained practitioner. ART's 500-move treatment protocol is exceptionally effective at identifying damaged soft tissue, and then treating it. These carefully designed, precision movements, like GT, can help increase blood flow, alleviate pain, and restore range of motion. All of this, again, is great news for sidelined hockey players everywhere.

Specially trained ART practitioners are adept at identifying the source of soft tissue injury or pain, then breaking down the scar tissue causing it. Active Release Therapy is also used as a preventative measure to keep muscles and tendons primed for workouts, thus avoiding injury altogether. ART can be great for dedicated hockey players, especially those who are experiencing routine or growing soft tissue pain. So if injuries are holding you back from giving it all you've got on the ice, ART may be the right choice for you.


Get Back on the Ice


Hockey is a great team sport, and it continues to grow in popularity. The fast paced, violent game, with its lightning runs up the ice and brutal collisions and falls, leaves athletes exceptionally prone to a variety of injuries. The Graston Technique and Active Release Therapy offer innovative ways to keep hockey players' muscles and tendons in good shape, and prevent injury altogether.

They are also extremely effective at treating soft tissue injuries and rapidly getting you back in action. So don't wait until it's too late. Do your homework, find a clinician who offers GT or ART and get back on the ice before anyone notices you were missing.

Our Chandler Chiropractic and Physical Therapy clinic treats patients with a variety of muscle, tendon, joint, and ligament injuries. The clinic provides treatment for hockey players, runners, tri-athletes, and weekend warriors in addition to common headache, neck, and back patients traditionally seen in Chiropractic, Physical Therapy, Massage Therapy clinics. We work with all ages and abilities of the residents in Phoenix, Tempe, Gilbert, Mesa, and Chandler AZ.