Dupuytren’s contracture is a shortening and thickening of ligaments that anchor skin to the fascia in the palm of your hand. The most obvious symptom is contracture of the palm and finger(s). If you cannot lay the palm of your hand flat on a tabletop, the cause may be Dupuytren’s disease. Although the condition is painless, Dupuytren’s contracture can make it difficult to put your hands in your pockets or do simple daily tasks such as writing or washing your face. Because this is a progressive condition, it is important to address it early, while non-surgical treatments can manage the symptoms.


What is Dupuytren’s contracture?


In its early stages, Dupuytren’s contracture appears as a nodule(s) with pitting of the skin in the area of concern. Your physician will examine the area for these nodules or raised bands of tissue, and press on those areas to see if the tissue has thickened. The condition most typically affects the fingers furthest from the thumb. It is not uncommon for both hands to be affected, although the condition is usually dominant in one hand 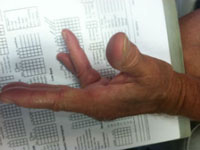 Dupuytren’s is most prevalent in men over forty years of age. Smoking, alcohol consumption and diabetes are all risk factors. Individuals of Northern European and/or Australian descent seem to be at higher risk.

Older adults with diabetes have a significantly higher risk of developing Dupuytren’s contracture, as do smokers and heavy drinkers. Unfortunately, surgical intervention is not always a permanent fix, as the condition is known to reoccur.

Who is at Risk for Dupuytren’s Contracture?


The condition occurs most often in men over forty years of age. Symptoms will disappear without treatment in about ten percent of cases. The disease progresses faster in patients younger than fifty years of age than in older adults. Smoking and high alcohol consumption can increase both disease risk and severity.

Dupuytren’s contracture can develop due to:


If the condition is mild, you can protect your hands by avoiding a tight grip on objects. If you use hand tools, tools with a bigger grip may make the job easier. Wearing heavy gloves while working for extended periods with hand tools may also help.

Because Duputren’s disease is not an inflammation of tissue, anti-inflammatory measures such as icing and over-the-counter medications including NSAIDS (Advil, aspirin) or acetaminophen are rarely helpful.


Physical therapy for Dupuytren’s contracture typically involves heat, ultrasound, stretching of the affected area and range of motion exercises. The therapist may suggest wearing a splint or brace to stretch the fingers further.


A Finger Web (see photo) can help you to strengthen the extensor muscles in the affected fingers to make it easier to perform activities of daily living.

The goal of therapy for Dupuytren’s contracture is to maintain or improve hand function. As such, any exercises that improve your manual dexterity, range of motion within both the palm and affected fingers with stretching and appropriate strengthening is going to make your hands more functional.

Although the Finger Web is ideal for these exercises, simple finger extension and flexion working on range of motion throughout all of the joints is helpful.


In its earlier stages, Graston technique, which involves the forceful pressure of stainless steel instruments to the area can break up thickened areas of skin or mild nodules to prevent the disease from progressing further. By sliding the steel instruments across the affected area, the practitioner causes the layers of tissue to break apart, similar to scar tissue. Graston technique can quickly help to restore hand function without the downtime and recovery from surgery. 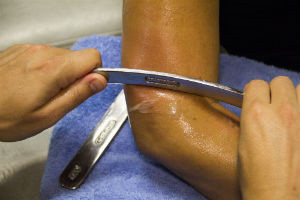 
Class IV Cold Laser or low level laser is a light therapy that can decrease pain and speed up healing. By increasing the delivery of adenosine triphosphate (ATP) to the affected area, the therapy increases mitochondrial energy within the cells to replace damaged tissue with healthy tissue. 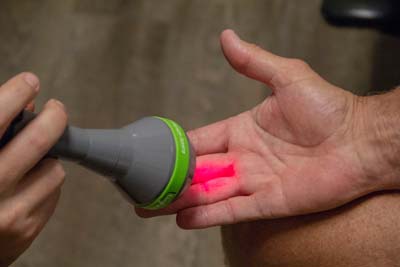 
In addition to Graston technique, extracorporeal shockwave therapy can be helpful for reducing tightness around the affected area.

Should the contracture become severe, consider seeing a hand specialist. He or she may suggest a corticosteroid injection, or if this is ineffective, an in-office procedure called a Percutaneous needle aponeurotomy of the nodule.

An in-office fasciotomy is a percutaneous needle technique done under local anesthesia, for minimal recovery time.

Our Chandler Chiropractic & Physical Therapy clinic treats patients with a variety of muscle, tendon, joint and ligament injuries. The clinic provides treatment for endurance athletes and weekend warriors in addition to common headache, neck and back patients traditionally seen in Chiropractic, Physical Therapy, Massage Therapy clinics. We work with all ages and abilities of the residents in Ahwatukee, Phoenix, Tempe, Gilbert, Mesa and Chandler AZ.