Trigger finger, also called stenosing tenosynovitis, is a common condition that occurs when the sheath surrounding the tendon of the affected finger becomes inflamed, and narrows the space through which that tendon can move. Eventually the tendon starts to fray due to the repeated friction, and lose strength. The effect is similar to threading a needle too many times with the same piece of thread: eventually the thread becomes too worn down to hold a seam together.

The finger tendon or sheath can become irritated and inflamed with both acute and chronic traumatic activity. Damage to the tissue interferes with the normal gliding motions of the tendon through the sheath, creating more irritation which can lead to scarring and tendon thickening. Eventually the thickening produces the formation of nodules (bumps) that prevent the normal gliding motion.

Excessive amounts of collagen or scar tissue is being formed on top of the injured tendon. Scar tissue formation is normally utilized as a "short-term patch" within the body, giving it time to properly repair and heal.

Normally scar tissue is removed within a short period of time. However in some cases scar tissue continues to accumulate. This is the nodule people feel in their hand and fingers that continues to increase in size over time. 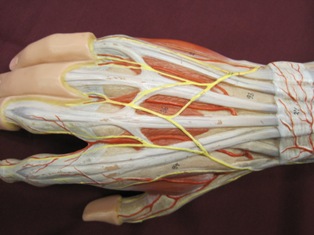 
There is a complex network of tendons, sheaths, nerves, arteries, veins, and muscles in the hand. The tendons insert on specific locations of the carpal, metacarpal, and phalanges. In the palm of the hand are the longer metacarpals which connect to the phalanges. The phalanges or fingers can also be referred to as digits.

Symptoms of trigger finger include:

Trigger finger is more common among women, particularly after menopause. Incidence is also higher in individuals with diabetes, and there is a higher risk among persons with carpal tunnel syndrome or de Quervain's disease, hypothyroidism, rheumatoid arthritis, renal dysfunction and amyloidosis. (Makkouk et al., 2007). Some people are more at risk for developing trigger finger, especially if they are in occupations, sports, activities, or hobbies that involve repetitive hand use with gripping. Repeated strain on the finger tendons increases the likelihood of developing trigger finger. 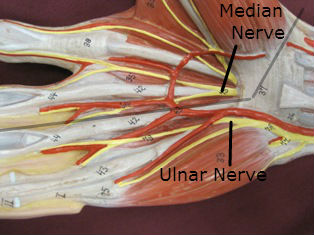 The condition most often affects the ring finger, but it is also seen in the thumb, index and small fingers. It can present in multiple joints. Because repetitive movements tend to make the condition worse, it typically affects the dominant hand.

The formation and development of nodules occur at different rates in different people. Some people experience a very slow gradual development of the nodule and clicking sensations. Other people experience a faster onset that quickly develops a clicking within one to two months. A faster onset is more likely to occur with a recent finger or hand injury that damages the tendons and limits the ability to straighten or move the finger.

Diagnosis is by a physical exam. There is usually no need for any type of imaging. X Rays, MRIs, & CTs are almost never needed because the diagnostic value very seldom adds any therapeutic value, unless the provider is ruling out fractures, avulsions. In some cases imaging is used to evaluate the level of degenerative changes which complicates the treatments and improvement.

The nodule along the tendon with the characteristic snap and click is all your provider needs to make an accurate diagnosis. So don't be surprised if they do not want additional imaging, tests, or referrals to specialists.


Conservative treatments are the mainstay, including rest and use assistive devices that make gripping easier. Whenever possible, try to use the opposite hand. You need some movement in the hand but not too much.

Splinting is an option, to prevent the friction caused by flexing the affected finger from making the condition worse. Since the condition is often the worst first thing in the morning, a night splint may help.

Your primary care physician may recommend over-the-counter anti-inflammatory medications which are generally safe when taken as directed. Icing is analgesic, and may be somewhat effective in controlling the swelling.

Some research shows that corticosteroid injections can be an effective treatment, particularly for non-diabetic patients (Makkouk et al., 2007). Your provider may recommend this treatment to reduce inflammation in the area and make it easier for you to perform activities of daily living. 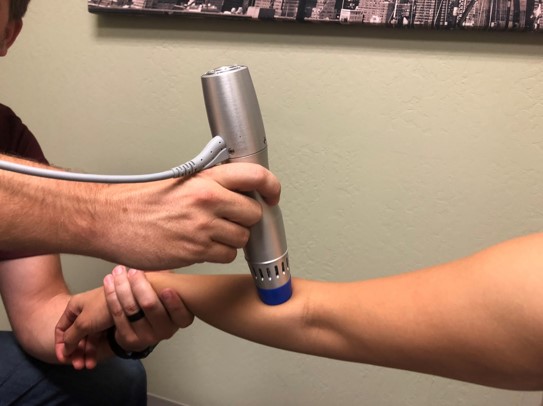 Extracorporeal Shockwave Therapy (ESWT) utilizes a percussive instrument to relieve tension in muscles and break up fascial adhesions. A 2016 article in the Journal of Hand Surgery summarized the result of a randomized controlled trial that compared the use of ESWT to corticosteroid injection to treat trigger finger and found both types of treatment to be equally effective (Yildirim et al., 2016).

The advantage of ESWT is that it doesn't carry the risks of damage to cartilage or bone density that repeated corticosteroid injections do. In our clinic, we have found both ESWT and Graston Technique to be effective in relieving the symptoms of trigger finger and in improving range of motion in the affected finger. 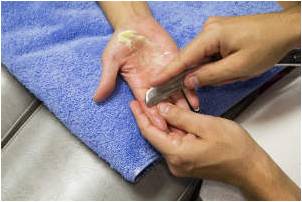 
Graston Technique works by stretching the outer layer of the nodule and scar tissue, breaking it into several pieces. The Graston instruments use shear force to pull the top fascial layer across the bottom fascial layer. This pulling motion breaks up the scar tissue between the layers. The broken scar tissue triggers healing mechanisms to migrate into the tissue and properly repair the muscles and soft tissues. 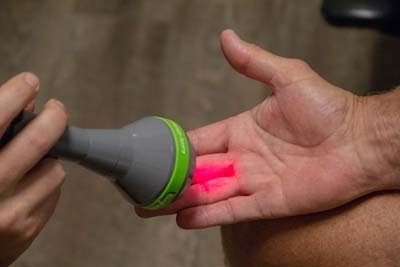 
Class IV cold laser, also known as low level light therapy or LLLT, takes advantage of an "optical window" that permits laser frequencies to help the body shut off inflammatory factors such as reactive oxygen species (ROS) that maintain inflammation in chronic injuries. At the same time, specific wavelengths and frequencies speed up the production and delivery of adenosine triphosphate (ATP), in order to heal the damaged tissue. Cold laser can reduce swelling so that you can move the affected finger more easily and decrease pain from trigger finger at the same time.


We combine all of these effective treatments into producing results. The most common question people ask is if the treatments will help. I can safely say almost always. These treatments were great on mild to moderate conditions. The exception is when people who let the condition go for years and now the nodule is excessively large. These people are better off with a surgical intervention first.