How often have you heard about the importance of a good foundation? I always like to picture the ancient Egyptian pyramids. The massive structures are built with enormous blocks of stones impossibly stacked upon each other. There is an incredible amount of precision that went into planning, designing, and creating each layer. The foundation and every layer above it is incredibly well built to support the pyramids. 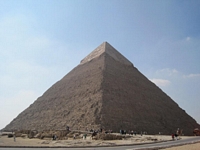 If the pyramids builders would have taken construction short cuts the pyramids would have crumbled years ago, instead they remain an ancient marvel. Conversely, we can all picture the Leaning Tower of Pisa. It has an incredible white glow but it is a construction nightmare. The tower’s characteristic lean began before construction was completed. Its builders were trying to “fix” the foundation problems while building the upper levels.

Your low back foundational strength is much like a pyramid. There are some principles and procedures that need to be accomplished at each level before building the next level. Failure to completely finish a layer will result in crumbling or collapsing of higher levels. In the body, every foundation layer needs to meet its flexibility, range of motion, and strength goals.

Everyone has a friend who tried a new gym, Pilates, or Yoga workout and had great success. He might tell stories of chronic low back pain that disappeared after a few months of exercise. However you may also have a friend who tried the same activities and aggravated their injuries from the same workouts. What was the difference?

In the office we say the successful friend was performing a mid pyramid level exercise (yoga) and had the foundation to handle that level. He was performing appropriate exercises to build the next layer. The unsuccessful friend only had two levels built and was trying to perform exercises three layers above it. It is the same concept as running a marathon. If your body is used to running five miles then it can handle a few six or seven mile runs without risk of injury. However if you immediately start running 15 miles, then you will eventually get hurt. You might make it a few days but something will give out. Your low back strength development works in the same way, people just don’t think about it along the same lines as running.

Many of us make the same mistake as the Pisa builders. We assume our foundation is better and stronger than it really is because it doesn’t “look or feel that bad.” But do you ever test your foundational strength? How do you know what a strong foundation is? You cannot base your assessments on what you did a few years ago, so what can you do right now?

Low back strength goals and testing follow our pyramid theory. We start by measuring your strength and endurance on the front, left side, back, and right side muscle groups. Then we measure how well the muscle groups work together.

Low back strength goals are to hold the anterior plank position for two minutes and lateral plank for one minute. Back extension (Sorensen’s test) is held for two minutes. Many people are surprised to find they have great strength on two of the tests but lousy strength on the other two. Guess which muscles fatigue during the day? Guess which ones try to compensate for the lousy muscles?

The next part of the pyramid testing is to determine how well the muscles work together. I refer to this coordination concept as “juggling.” The muscles need to work together like your arms when juggling. You have the strength to throw four baseballs up in the air, but do you have the coordination to juggle them? Poor coordination can lead to big sprains when simply bending down to pick up a shoe. The body wasn’t paying attention to stabilize the joints, which lead to the sprain. It is more important to have great coordination than pure power. Big, strong weight lifters have low back pain, too.

We teach coordination and stability exercises in a step wise foundation. Master one exercise before moving on to the next level. Trying to skip steps and levels will eventually lead to a plateau and you won’t be able to make any more gains. When your body does not have proper coordination, it will compensate and “cheat” to accomplish exercises. You might get through a few repetitions but eventually the “cheating muscles” fatigue and give up. Coordination exercises emphasize the correct muscle patterns to develop coordination and “juggling.”

Over the years we have seen many people with chronic low back pain. People who are diligent and work through the pyramid progression always do well. They will be the first ones to tell you about the improvement in their daily pain and functional levels. Nobody likes starting at the bottom pyramid levels and working through the progression, everybody wants to start in the middle. But the difference in results comes from stabilizing and solidifying the foundation of the pyramid.